Why I Support the #StopBMI Campaign

Home » Why I Support the #StopBMI Campaign

When my professor made us measure our food intake on a website that counted my calories and only gave me the option to lose weight rather than maintain, I struggled. I pushed through mainly because I was hoping that the following week would not be as triggering. When she had us calculate our BMIs the next week, I drew the line and emailed her. 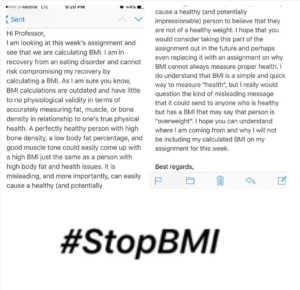 I know exactly where I would stand on a BMI chart, and I also know that my BMI would not nearly tell the whole story. As the instructor of a basic health class, my professor had a lot to learn about how to properly teach this subject, if she should teach it at all. At the very least, a disclaimer should be involved. Beyond my class, though, this problem is still seeing little to no improvement. BMIs are still being used and taught by doctors and educational programs in everywhere from elementary schools to colleges like mine. Dr. Janet Tomiyama, a professor from UCLA, has heavily researched this topic. In her findings, she has discovered that BMI misclassifies approximately 75 million Americans as either healthy or unhealthy. She has also stated that many of those with BMIs that indicate that the person is overweight or obese, are in fact healthy. The facts are simple, BMI alone is not enough to determine health. Often it is seen as a simple tool to calculate a number, but for many of us it is much more.

The first time I can remember calculating my BMI was when I was 7 or 8. I remember finding a website on it and, very quickly, it became an obsession for me. I don’t consider that the start of my eating disorder, but that definitely set a solid foundation for it. Years went on and we calculated our BMIs year after year in school. What I wish I had known then was that my “overweight” BMI at age 7 had nothing to do with my overall health. I was an athlete who ate healthy and still had my baby fat. I was the strongest girl I knew and was proud of that. But this number told me that I was unhealthy. And I did not know that it was wrong. It led me to believe something was wrong with me, and thus the dieting began. It wasn’t until 5 years later that I would truly consider the start of my eating disorder, and 9 years after that here I am, fighting against the same thing that made me so insecure in the first place.

The issue of BMI acting as a trigger unfortunately, is not only bound to me. Dr. Dianne Neumark-Sztainer, a professor at the University of Minnesota, has been able to link BMI testing in schools as a potential trigger for those susceptible to eating disorders. Many schools have implemented BMI “report cards” which are sent home and tell the parents what their next steps should be in regards to their child’s health. In her research, Dr.  Neumark-Sztainer has discussed elementary school BMI testing as sometimes being “early steps along the long and complicated road to an eating disorder.” There is no one way to develop an eating disorder, just as no two of us with an eating disorder are alike; however, it does make me wonder why, if BMIs have shown inaccurate and potentially triggering, that schools still use them without disclaimer.

BMI does not measure your body fat. It certainly does not let you know that your fat is there to nourish you and keep you energized. It does not measure your muscle which helps you dance and run and move your way through life. It cannot tell you about your intelligence nor your emotional strength nor all of the things you have gotten through to make it to this point. BMI cannot and will not mention how you look, how you live, or how much you are worth. And most importantly, it cannot accurately tell you about your overall health.

I wrote this email to my professor because as college students and most importantly as people, my classmates and I deserve better. My BMI does not explain nearly half the story. I will not allow my health and recovery to be compromised by a meaningless number. Do not let yours be either. #StopBMI