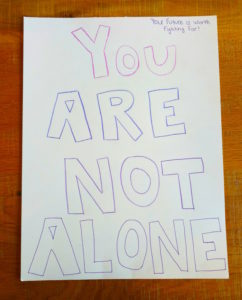 Struggling with an eating disorder can be a hard and lonely place. Before I found help and long before I had found hope I felt alone. My eating disorder played a role in isolating from friends and other social things but in general just having my eating disorder was lonely. I didn’t know who I could talk to or what I could do about it. I just knew that I was in a dark place in my life and I didn’t know where to turn. Sometimes people with eating disorders aren’t open about having their disorders which can make struggling with one feel even more lonely because it can feel as if no one else in the world understands the struggle and pain that is happening within our bodies and minds.

A year ago I was in a hole where no one really knew that I had an eating disorder. I wasn’t even convinced that I had an eating disorder. I had already started making some small baby steps to acknowledging my eating disorder and working toward recovery like attending an ANAD support group but other than that I was still convinced that I could deal on my own. Then it was Eating Disorder Awareness Week. I had friends  on social media that followed ANAD and other recovery focused pages on social media so I saw posts about the week. I also followed some other mental health groups that promoted recovery and support for eating disorders. That week I realized two main things: 1)  I am not alone and 2) It’s okay to get help.

Realizing I wasn’t alone with the thoughts I was having or the other struggles that I was facing was a big moment for me. My fight and my life became a little less lonely because even though I didn’t know most people that were posting or I would just be seeing posts from random groups I realized that I didn’t have to fight alone. I started realizing that it was okay for me to reach out to others. At first it was reaching out to friends and to people I knew from my ANAD group. Then a couple of weeks later I allowed this realization to expand a little farther in my mind and I left school to go home to enter treatment.

Eating Disorder Awareness week helped to jumpstart my recovery. Last year I found hope. This year I celebrate the hope I have and try to educate others as well as letting them know that they are not alone and that help is out there.