By Kathy LuanANAD Blog
No Comments 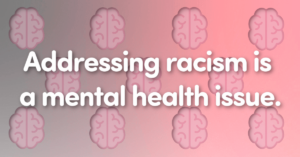 According to Mental Health America, “the continued use of ‘minority or marginalized’ sets up BIPOC communities in terms of their quantity instead of their quality and removes their personhood… The word ‘minority’ also emphasizes the power differential between ‘majority’ and ‘minority’ groups and can make BIPOC feel as though ‘minority’ is synonymous with inferiority. Though ‘minority’ and ‘marginalized’ may continue to be used in academic spaces, the words the mental health community uses need to change in order to help communities understand how these terms create and perpetuate negative images and stereotypes of individuals that identify as BIPOC.”

EDCare stands in solidarity with the BIPOC community, and we strive to offer eating disorder treatment services in an inclusive and equal treatment environment. We recognize that – even as we strive to do this – we will fall short and need to continually re-evaluate in order to identify blind spots and gaps in between the inclusive care we seek to provide, and the inclusivity of the care we deliver. We are using this time to modify hiring practices, secure additional cultural training for staff, create cultural competency training packages for all employees, and most importantly continue this crucial conversation on a daily basis.