“There is No Wrong Way to Have a Body”

Home » “There is No Wrong Way to Have a Body”

It  seems that body shami 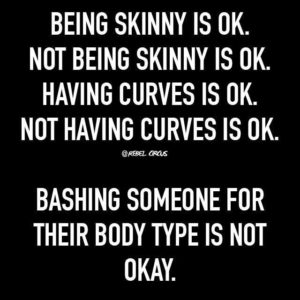 ng  has become the norm in today’s society as it is happening everywhere at an alarming rate. With social media to help add fuel to a fire that is already an inferno, attacks can be made by people in a very public way or they can choose to throw shade in total anonymity. The tentacles of this pariah are as far reaching and inclusive as our society itself. From the White House to Hollywood to that kid who sits next to you in class, it knows no bounds. I would go as far as to call it a “social trend.”

The list of body shamed A-listers is longer than I care to admit: Ruby Rose, Russell Crowe, Sarah Hyland, Sarah Huckabee Sanders  and the list goes on and on. Sometimes in these high profile cases they can fire back using the same social media as their weapon rather than their poison.  In the case of Ms. Sanders a retraction was in order. The retraction came from Pulitzer prize-winning journalist and cartoonist, David Horsey from the  LOS ANGELES TIMES. Within 48 hours he had deleted the body shaming part of the original story and issued an apology to White House Press Secretary Sanders.

Ruby Rose, an international entertainment powerhouse and self-identified genderfluid, lesbian, decided  to hit back with a bold, yet poignant set of messages on Instagram story at the end of October. The message was loud and clear to all body shamers out there “I hate it because it uses no logic and basically is just someone projecting their experience and expectations on others.” As of November 4th Rose was still calling out trolls on her account telling them “Body shamers I had a great work out this morn thanks for asking and am off to eat a vegan burger because why the F not!”

Russell Crowe is a prime example of how this “social trend” knows no bounds. This is one instance where “male entitlement”  went silent. Crowe is amongst the growing number of men who have had to deal with this type of body scrutiny. His troubles started a few months ago when a photo surfaced of him exercising in a park at a heavier weight than his norm, you could hear the keyboards tapping away. To make things even worse, Howard Stern allegedly made disparaging remarks about the this photo. Like a champ Crowe took to Twitter and used it to his benefit to send a clear message to Stern.

The last example is Sarah Hyland, from the sitcom ‘Modern Family’. She is a great example of how body shaming is not always about weight. On Wednesday, November 1st, Life and Style magazine published an article (which has since been edited) in which doctors speculated as to whether she had undergone plastic surgery. Wasting no time, she took to Twitter with a few humorous/sarcastic home-made videos that put the magazine in their place. 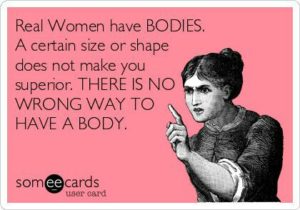 These examples in hand, I took to looking for articles and research done on the subject of body shaming and its effects. I found so many my brain hurt. This was both refreshing and troubling at the same time. The consensus being that the end  result of body shaming is poor self-esteem, depression, anxiety and eating disorders.

With the combination of social media being a staple of our everyday life and eating disorders starting to be discussed openly, it sets up the perfect storm. Now anyone who might be considered “overweight “OR “underweight “ is fair game. Unfortunately, people can take pictures of our physical being and plaster it all over Instagram, Facebook and (you fill in the blank) and say what they will. Wouldn’t it be awesome if you could capture a glimpse of your amazing heart of gold, your whimsical nature or your kind soul! Only to be hashtagged, #kindness #warmth #inside #unconditional #love! Definitely a future project for me. The gears are already shifting.

I don’t know if people are losing their social filter or we as a collective ”us” have just become meaner, but we are becoming more adept at trying to bring people down rather than building one another up. What is the first thing someone will attack if they want to get a dig in at you? It won’t be the beauty of your soul or your expansive ability to live in the moment. It is more likely to be a stabbing left hook to your appearance or your socioeconomic level. Just like a boxer who receives too many of these blows, we too fall to our knees.

The big question is “How can we put an end to this problem?” My answer, is education and not ill will. You catch more flies with honey than you can with vinegar and the more positivity you put out there the more you will get back. We need to remind the media and people in general, that people DO have feelings. Even people that you assume have thick skin and resilience have psyches you can  f**k with. A good rule of thumb: Think about what you are going to say three times before you say it, if after the third time it is something you would want said about you and you can back the statement up with facts, then proceed with caution.